In the past few weeks I’ve put my thinking onto the trends of technology, particularly in programming and electronics. In the spirit of Martin Fowler on Making The Magic Go Away, I try to peek under the bonnet (or you prefer ‘hood’ in AE) of a piece of recent technology. The first victim is the trendy framework that used by high profile site like Paypal and Über, or even Ohdio: NodeJS. I hate JavaScript, so why I looked at it? Initially I want to bash node, but it turns out I’m amazed by the simplicity and the elegance on how it was built. It does not make me love JavaScript, but it makes me intrigued on how it works. In this article, I’ll explain what happens inside NodeJS by explaining it in Rubber Duck Debugging style.

On the day when Windows 3.1 was released, in a good ol’ 16-bit age, there was NO THREAD. Bummer. The way Microsoft has done on Windows 3.1 was a thing named cooperative multitasking. The app developer must voluntarily ceded its control and limit its execution for other app to be able to run simultaneously. If you happen to read and write on Floppy Disks you’ll block the other process. There was no multi-thread until the release of Windows 95 with pre-emptive multitasking. It still run on single processor, so it was just as good as running them interleaved with other tasks. 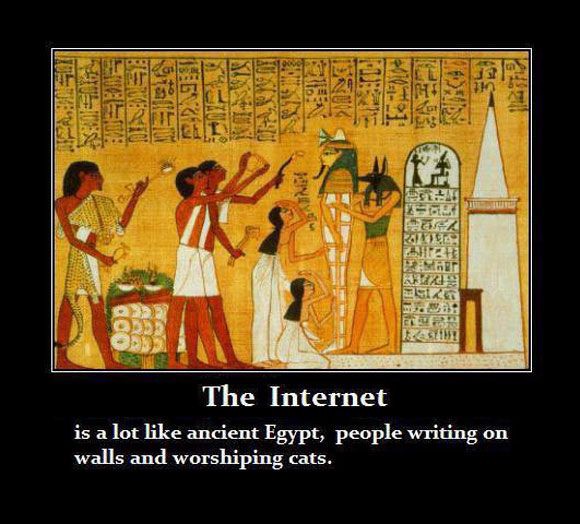 If you’re a redneck CS you may cringe when you read this. I’m aware that ‘thread’ is available on UNIX during that time in the form of [processes] that share memory. I use Windows to make the reader easily find resonance to ease understanding.

Multithreading was cool and hot (sounds like on oxymoron). Programming multithreaded app, however, is not trivial. Things like deadlock, livelock, starvation, and race condition is hard to debug. It is hard enough for single processor. And then, multicore becomes mainstream. It’s a blessing for users (more tasks, yay!). For developers, it adds another nightmare: now I don’t know if my thread running on which processor, they can be run in parallel. Developers are seeking for a way to reduce the pain. Nowadays most of the operating system has an asynchronous I/O and I/O notification in the form of epoll,kqueue, or I/O Completion Ports. You don’t need to block your I/O read and write operations. Instead you can wait for a notification to be sent. The time spent for waiting, can be used for another tasks without spawning a new thread. It basically brings up ‘cooperative multitasking’ from OS level to application level. It’s like we’re going back in time, refining our former art.

Unlike a thread-based app, when we need more power, we just spawn another process that shares nothing, no shared memory, no shared stack. This avoid many problems related to multithreaded programs. This is the basic philosophy of NodeJS.

The block diagram below is the simplified version the architecture of NodeJS.

That’s essentially what NodeJS is. A JavaScript runtime and an evented I/O engine. The birth of node is in the right time and in the right place: when browsers are competing each other for the fastest JavaScript implementation, and at that time V8 was leading in the term of performance. The choice of JavaScript is, as so much I hate it, is actually reasonable. It’s a “language of the web” that, according to Douglas Cockford, is actually doing something right in its core: > “… despite JavaScript’s astonishing shortcomings, deep down, in its core, it got something very right. When you peel away the cruft, there is an expressive and powerful programming language there. That language is being used well in many Ajax libraries to manage and augment the DOM, producing an application platform for interactive applications delivered as web pages. Ajax has become popular because JavaScript works. It works surprisingly well”> — Douglas Cockford

JavaScript is suitable becaues it is one of the popular language that introduces asynchronous programming. You can ask a web frontend devs (in my case, it’s my coworker), if you can block the web UI and make the user wait for process, and I can be sure that he/she will ask you if you’re kidding. The JavaScript JIT, runtime, and binding is provided by V8. I won’t talk much about V8. Covering it will take a book than a post. In short, V8 provides the JIT and runtime support for JavaScript. It is written in C++ by Google, initally for their Chromium project.

libuv, Is The Beast.

For Node to work, it needs to be bound to an evented I/O engine. That’s where libuv comes. It provides a cross-platform abstraction on top of epoll/kqueue/poll/iocp. Before libuv, node used libev, which itself are modeled after libevent. Due to its limitation on Unix/Linux only platform, the team decided to write an IOCP version of libev, and libuv was born. Over the time, the responsibility of libev was being taken over by libuv due to performance reason and specific NodeJS need. This is what happens inside libuv: 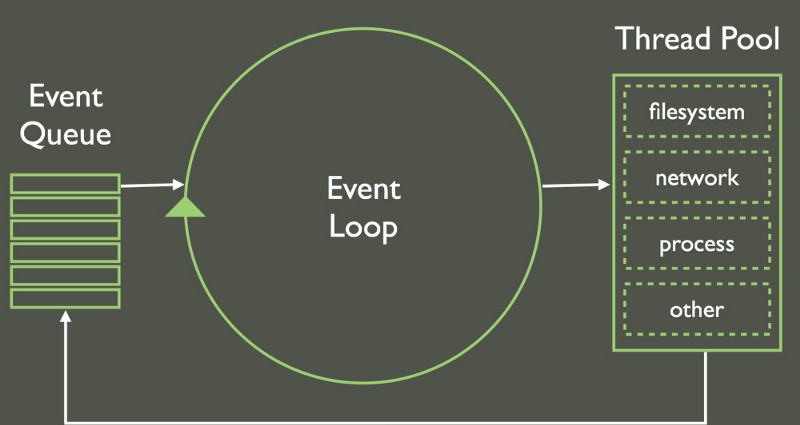 It provides esentially three things: I/O event abstraction, the event loop and a thread pool. It includes many things inside it, you can take a look at their documentation. I may have separate post about libuv later on.

One Code to Run Them All

libuv is written in C for portability. It can be compiled and run on most of mainstream operating systems, including iOS and Android. NodeJS binds V8 with libuv and adds some additional support like compression, HTTP parsing, and TLS support. You can see the dependencies by reading its build script. If you dig the entry point of NodeJS in node.cc, all it does is setting up the V8 environment and starting the libuvevent loop:

In my opinion, Node’s code is very clean, readable, and modular. I usually search the entry point to study the code. The Start function is NodeJS entry point. It’s the only code called by main function inside node_main.cc. We can clearly see what the code doing here:

So whenever you run any NodeJS application, this piece of code is always called in the first time. From here we can traverse back to the call graph. I’ll be going through each of the most important functions.

Still in the same file, node.cc if we traverse back the call graph we have PlatformInit() function. Personally, I think the name is a little bit misnomer. The function is used to register and handling POSIX signals and setting up logging. It also setting up the handler for SIGINT and SIGTERM. On other platforms that do not define __POSIX like Windows, this function is NO-OP.

This function is straightforward too. In this function we pass the command line arguments to both libuv and V8. It’s also where the timer is initialised to get relative application uptime. Other tasks that this function does is setting up the debug message dispatching. I’m surprised that Node is actually using libuv’s default loop, as it calls uv_default_loop()everywhere. When the function succeeded it will set thenode_is_initialized variable to true. Thus marking that the node is ready to start its event loop.

So this is the crux of all of it. The function is very much self-explanatory. It starts an instance of Node process. First it will get instance_data from parameter passed to it. And then it will set up the V8 Isolate. From V8 documentation: > _Isolate_ represents an isolated instance of the V8 engine. V8 isolates have completely separate states. Objects from one isolate must not be used in other isolates. The embedder can create multiple isolates and use them in parallel in multiple threads. An isolate can be entered by at most one thread at any given time. The Locker/Unlocker API must be used to synchronize.

An embedder on our case refers to NodeJS. To create an Isolatewe need a CreateParams. In this param, Node assign an array_buffer_allocator which it will assign to an instance of ArrayBufferAllocator. The definition of the allocator is on node_internals.h, so I guess it is something that node-specific. Node is using a malloc and calloc based allocator. You can see it in the Allocate implementation in node.cc file.

The heart of the process is in here:

The first part of the code is required to start a V8 instance. It set the Locker, HandleScope, and Context. For more information about them, you can refer to V8 Embedder Guide. The second part, the LoadEnvironment is a magic. It’s actually loading a bootstrap script, namely node.js. I think the framework is named after this bootstrap script. It is the first script executed, and further it will also load your app. See this part of code in the node.cc inside LoadEnvironment function:

These piece of code will load the node.js bootstrap script and then execute the top level function. In the node.js script it is the process function. After that, all execution are handed over to modules. Modules provides additional functions outside what provided by V8. By using modules, V8 can communicate and access underlying systems. You can inspect the source code of node.js to see which modules is loaded on startup.libuv functionalities also wrapped in modules. The built-in modules are located in the lib directory. There are a bunch of JavaScript files there that provides a standard library for NodeJS. Most of the modules provides libuv functionalities to the JavaScript world.

Going back to StartNodeInstance function, we see a do..while block. This is the loop where all the processing going on. It pump the V8 message, and give the control to libuv to inspect if there’s more event request over there by calling uv_run with UV_RUN_ONCE on the event loop. It’ll poll the I/O once and return nonzero if there is pending callbacks are expected and will save that to more as an indicator there are callbacks. If more is false then we do one more message pump and running the BeforeExit event hook and checking if the event loop is still alive by checking the uv_loop_alive and after that it’ll run the event loop again by calling uv_run. This BeforeExit event can make asynchronous call and causes NodeJS to continue.

NodeJS is a very interesting piece of engineering. I’m surprised on how simple the premise of the framework is. At beginning it was just a JavaScript wrapper for libev and libaio to provide JavaScript programmable server-side evented I/O. It grows interest over the time and creating a whole ecosystem by itself. Despite its interesting history of breakup between nodejs and iojs, the contentious tension between Joyent employee and node contributor, it evolves, and becomes one of the most important project in Open Source community. The code base is still relatively small, the code is readable and easy to follow. I hope this UTB article can help you understand how Node works and can be a starting point if you want to contribute on NodeJS.

If you want to see the very first presentation by Dahl in 2009 explaining NodeJS, it’s still perserved in JSconf.eu website.